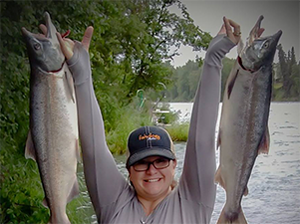 Orca Lodge is blessed with rougly 500 feet of PRIME Kenai River fishing bank that our guests enjoy every Alaskan summer, raking the shallows with the fishing rods and gear that is provided by the lodge, stacking up tasty sockeye salmon onto the custom aluminum dock that hovers ominously over the abundant emerald-green waters flowing by.

Over the last 20-something years, countless sockeye salmon (aka “reds”) have met their maker at the Orca Lodge riverfront, and literally thousands of guests have tried their luck since the first season Orca Lodge was spawned (pun intended), but only a handful of anglers stand out above the rest as the top 5 Kenai River Sockeye slayers of all time!

From the tropics of Maui, “El” was raised with a fishing rod in his hands, and the Shimokawa family began visiting Orca Lodge when he was only a youngster. Despite his youth, Ellison could always handle a fishing rod with even the best anglers on the river, and by the time he became an adult he was nothing short of unstoppable with a sockeye stick. Legend has it that Ellison could simply stare a fish in the eyes for 3 seconds and it would bank itself at his feet. I can’t confirm it to be true, but I can’t confirm it to be not true either.

An outdoorsman to the core, Randy is equally as deadly with a bow & arrow as he is with a fishing rod. Randy enjoys flinging arrows accurately from 100+ yards, driving across the country to fish the Orca Lodge riverfront each summer, and waking up at ungodly early hours to limit out on Kenai River sockeye salmon while the rest of the world remains sound asleep only dreaming about doing the things Randy is living out in reality.

Born and raised on the Kenai, Matt is an accomplished sockeye fisherman that can also sell you oceanfront property in Arizona where he currently resides. Matt migrates his way back to Orca Lodge each summer to try and set a new record by snagging 49 sockeye in a row without hooking a single one in the mouth. A tall task indeed, but if anyone can do it….

This amazing family spends 1-2 weeks at Orca Lodge every season, and you’ll know they’ve arrived when you see their pink spinning rods planted into the rod holders at the fishing dock like flags on a mountaintop. Multiple generations of Jagielski’s grace the Orca Lodge fishing platform each season and all I can say is that this family is just plain fishy. We look forward to seeing them every year, even if they do make us locals look like sockeye fishing rookies!

Last but certainly not least is the legend himself, Joe Wackler. Joe is the man that built Orca Lodge, and although he’s no longer in the business, he still lingers in the neighborhood stopping by periodically to put on yet another sockeye slaying clinic for his fans…I mean, our guests. Joe’s patented technique of catching his limit while simultaneously leaning on the railing as if he doesn’t care that he ever catches a single fish again is impressive to say the least. Turn your back for more than a second and Joe is liable to catch his limit and have them filleted, vacuum packed & frozen before you can make even a single cast. Sockeye anglers from all around the world tell stories of the speed at which Joe descends upon the Orca dock, catches his limit, and then seemingly vanishes back to his house on the hill…

Many anglers strive to make this list, and many have failed. Think you belong on the list? Come prove yourself by going toe to toe with the best sockeye slayers in the world at our annual sockeye slaying competition, held every summer here at the Orca Lodge riverfront!